Living, Loving, Laughing and Looking Great …at Any Age

“…there aren’t any men out there for women my age.”

What’s the point of looking cute, feeling entitled or comfortable with my age if I’m

alone? I know you divorced, widowed or never-weds are bitching.  I’ve read the same articles you have about a woman over forty having about as much

chance of finding a husband as being abducted by aliens or getting run over by a guy driving an Edsel.  I think that kind of proclamation is tantamount to social terrorism.  “Studies,” “research,” and “statistics” can be (and are regularly) skewed to meet the results desired—just look at political polls—the answers depend on the questions asked.

As I see it, the biggest problem with this particular theory starts with the search for a

“husband.” Isn’t that the most supreme example of putting the cart before the horse? How about starting with—I don’t know— let’s say—

finding a date? Take a minute and work your way up to the big “H!” Even Evel Knievel probably had to learn to ride a tricycle before he decided to try to fly his motorcycle across the Grand Canyon.  We all know you have to walk before you run but you’re already planning your dash down the aisle.

The complaint I hear the most is that there are no men out there. And “out there” can be anywhere—Cleveland, Peoria, New York City, Albuquerque, Mayberry, Portland (Maine or Oregon.) There’s a really vicious rumor going around that “all” the men who aren’t married or similarly tagged unavailable, are unemployed, sick (physically or mentally), dangerous, interested only in younger women or gay.  It doesn’t seem to matter if it’s urban or rural, northeast or southwest—the hue and cry is the same “…there aren’t any men out there for women my age.”

Wrong. This is a totally ridiculous and erroneous notion.

My grandmother used to say, “There’s a lid for every pot.” (Although I firmly

believe some pots cook better topless and some lids fit more than one pot.) And it seems the proliferation and popularity of online matchmaking is a 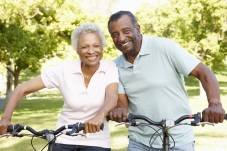 testament that there are plenty of women and men looking for and finding dates and mates. Although I have never tried one of the cyber dating/hookup services, and despite that as I stated in the introduction about being overfifty, overweight and unmarried—I have NEVER been without the company of a man—husband, live-in, boyfriend, date—unless I chose to be. I found men, or they found me, all the time, everywhere. And I don’t mean the dregs, bottom of the barrel, loser, louse kind of guys—I’m talking about bright, talented, top of their game, winner, really great guys.  They may not necessarily be right for me (and now that I’ve found my “lid,” I’m off the market anyway…yes Nana you were right. It took a minute for me to find him and him to find me,  but better late than never!) I am here to tell you that there ARE LOTS OF MEN around…everywhere! They are right and they are ripe for someone– and that someone could be you.

However, you will NOT meet men like these, or any other men for that matter,

sitting home watching the Bachelorette,  complaining to your bestie about the dearth of guys, or listening to your old Luther cd’s recalling the one(s) that got away.

So, let’s get back to “out there,” you know, the place where men are not. The fact is that as a general rule, and despite that this is the 21st Century, men are still far more “out in the world” than women. What “ladies” do and do not do and where they do and do not go was another of those early messages we were taught as girls. And despite our

exposure to, or even participation in, the feminist/womanist cultural revolution, good home training dies hard and we limit our perambulations accordingly. But it isn’t really likely that The Guy you’re looking for is going to ring your doorbell. I mean, he may be the UPS man, but if he was, you’d already know that by now. So the answer is that you have to be “out there” too.

First, throw away the list I know you have tucked away in your lingerie drawer or

scribbled in the back of an old journal. You know the list, the one with all the things your “perfect” man will be— tall, rich,

Second, do NOT travel in packs—going out with your five best sisterfriends is a fine, fun thing to do, but NOT if you’re interested in

meeting a man. Most men (of all ages) avoid flocks of females for lots of reasons—culling the herd to find out who they might really be interested in is too difficult and time consuming a task, a bunch of babes multiplies the level of scrutiny (and potential rejection) they are subjected to. Guys are out for a relaxing time. They don’t want to (nor should they have to) take a battery of tests in order to have a simple conversation. So, if you can’t bring yourself to go solo (which you should really learn how to do-but that’s another lesson) one friend has to be companion enough.

Third, do not dab Eau de Desperation behind your ears, or spray yourself with a cloud of Contempt Cologne. These scents aren’t available at your favorite fragrance counter, in fact they probably aren’t even the ones you normally wear, but somehow, they are too often the default choices for the very women who say there are no men “out there.” I

gotta tell you—a man can sniff out both of these killer scents a mile away.  Eau de Desperation, shouts “doormat” and when the first whiff hits his olfactory system, one of three things will happen: (1) He’ll take advantage of your apparent neediness and walk all over you, (2) he’ll run as fast as he can in the opposite direction, or (3) it turns out he’s as needy as you are and the two of you are soulmates (needless to say this last scenario is the least likely to occur.)

Contempt Cologne (naturally derived from stewing bits and pieces of every guy who’s ever done you wrong or fallen short of your expectations) is an even more pungent aroma though it isn’t usually detected by him immediately. But right there, under your lovely mouthwash laced breath, it waits for a hopeful, unsuspecting fellow to saunter over and introduce himself. Now I’m not saying this guy is the one for you, or that he may not be an egotistical idiot; but what I am saying that this particular man has done nothing to warrant your disdain—yet. So, the tendency to subject him to a level of interrogation, scrutiny and ridicule that makes the Inquisition look like an open book test, has to be checked. Because by the time you get to the “Where do you live?” “What do you do?” and the most hateful “What do you drive?” he’s looking for the escape hatch because he already knows, you’ve gone to the dreaded check list and he’s gotta produce his credit report, current bank statement and three references to prove he’s worthy of five minutes of idle chat.

Yes, of course, he has to be employed (or independently wealthy) and he can’t be living at home with dear old Mom (or his ex) and he needs reliable transportation (which a 1979 Pinto is not). But find out if you even LIKE the sound of his voice (Mr. T? Billy Dee? SpongeBob?)  the way he smells (Yes everybody has one—one that has nothing to do with bathing or deodorant -some are just right AND some are just wrong!), his sense of humor (are the Three Stooges his idea of comic genius or does he find hilarity in esoteric but subtle sarcasm?), enough to need the answers to the heavy questions that really matter.

Stop sitting around waiting for “him” to appear. Get out of the house. Go forth..without your posse. Do things (not embroidery class) and go places (not Nordstrom’s shoe department—unless you’re looking for a foot fetishist). There are plenty of fish—the sea is vast and the fishin’s good—but to cast your line, you have to put on your gear and get wet… more than once!